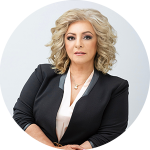 Jackie studied business administration, management, human resources and leadership while raising her two boys. She started in the personal injury industry when she was only 25 years old as a receptionist. Working her way up from case manager to senior case manager to office manager to chief of operations, she eventually acquired almost 30 years of experience during which she opened her own business as a legal consultant.

She wanted to help those who were unable to continue their education or unable to obtain a high school diploma for different reasons. As part of her desire to help others achieve fulfilling careers, Jackie began training people to become case managers in 2010. In 2018, she launched her formal business and to date has served law firms and chiropractors in town by way of training their employees and attorneys. She is highly respected in the field by these professionals because of her knowledge and experience.

Anna Albertson has served as a court appointed arbitrator (since 2014), Judge pro tem (since 2018), and Truancy Court Judge (2015-2017). She is a business owner, mother, attorney, and wife. She has tried over 50 cases to verdict and represented more than 1000 clients. She is regularly asked to lecture and run trainings for other lawyers in the community on subjects ranging from trial practice to rule implementation. For years she has successfully represented clients that are living paycheck to paycheck or trying to keep businesses afloat and as a result she understands how much the rulings made by a judge can affect an individual or small business.

She has been instructor at Coaching Pros teaching Basic Foundations of Prelitigation.

Currently she is serving as Department 11 District Court Judge. 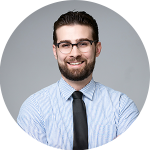 William began pursuing a legal education at the University of California, Berkeley where he had the opportunity to intern with Senator Hannah Beth-Jackson and Governor Sandoval. During his undergraduate internships, William was able to learn the process of creating and enforcing the law.

After finishing his undergraduate education, William would go on to attend the University of California, Hastings College of the Law. In law school, William interned for the Office of the Nevada Attorney General and the Clark County Public Defender’s office. Here, he was able to get hands on experience representing the State of Nevada and various criminal defendants.

Upon graduating law school, William received an opportunity to be a personal injury attorney at Anthony Paglia Injury Lawyer where he has been learning and practicing personal injury law ever since. Although William was educated in California, he considers himself a Las Vegas native.

He is currently an instructor at Coaching Pros Academy. 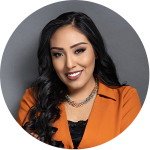 Melissa graduated from University of Nevada, Las Vegas, where she double majored in criminal justice and psychology. Wanting to continue in the legal field, she began working as a case manager assistant in a personal injury law firm. She later was promoted to case manager, then a year later to litigation paralegal. She continued for a few years as a litigation paralegal, until she was presented with the opportunity to work as an administrative assistant for Coaching Pros for Personal Injury LLC with founder, Jacqueline Villeda.

She is currently operations manager for Jackie Villeda’s three businesses in the personal injury industry. Additionally, she is a graphic designer and editor at Legal Directory for the Community, as well as the academy’s student relations coordinator and instructor.

Licensed to operate by the Commission on Postsecondary Education